Richard Nixon’s ancestry: possible clues about why some hated him

A. It is politically-correct to hold Richard Nixon in contempt.
B. Nixon was arguably the final American president that could be said to sympathize with populist-nationalism, a kind of throwback to the politics of decades earlier.
C. Richard Nixon’s ancestry was of entirely Colonial American stock.

Rather than directly addressing that any further, let me present a detailed analysis of Richard Nixon’s ancestry. The reader can judge for himself to what extent his ancestry may or may not have animated his worldview.

Synopsis Richard Nixon’s ancestry:
— All 16 of Nixon’s great-great-grandparents (b. 1780s-1807) were American-born.
— All of his ancestral branches were probably in the USA in 1776. (31/32 branches are confirmed in the USA by then, one may have arrived shortly after, see entry #8 below).
— Many of his ancestors helped push the American frontier westward in the late 1700s, on the heels of Daniel Boone.
— All four of Nixon’s grandparental lines end up in Ohio by the mid-1800s.
— Nixon’s parents went to California from Ohio, marrying there in 1908. Nixon was born in California in 1913.

Richard Nixon: Ancestry Summary
Where Nixon’s ancestors were living in the early 1700s 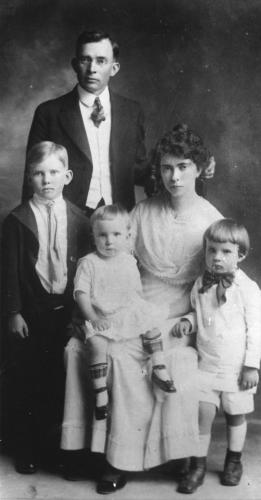 Richard Nixon as a boy with his parents and siblings. 1916.

A brief biographical sketch on each of Richard M. Nixon’s 16 great-great-grandparents is below. (Father’s-father’s line descending to mother’s-mother’s.) [Sources used: A, B, C, D].

.
Richard Nixon’s Great-Great-Grandparents
[with a Personal Ancestral Summary for Each Individual]

— 1. George Nixon [100% Colonial-Delaware]. Born 1784 in New Castle County, Delaware; married 1807 in Washington County, Western Pennsylvania; died July 3rd 1863. This man’s grandparents were all native to Delaware. NOTE: This man had a son who was also named George Nixon (1821-1863), who died in the very same month, July 1863. The son’s death is listed as July 14th 1863, with a place of death listed as Gettysburg. Most likely, this means that George Nixon the younger was a Union soldier was wounded at the dramatic battle of Gettysburg, who was relegated to a field hospital because of the severity of wounds, and who died of his wounds two weeks later. A fascinating historical coincidence is that the father, George the elder (1784-1863) died on the final day of the Battle of Gettysburg, possibly only a matter of hours after the son received the bullet wound from which he would die. Update, November 2014: Jim Struthers writes: “[Richard Nixon’s great-grandfather George Nixon was in] Co B, 73rd Ohio Vol/ INF. Wounded at Gettysburg 7-2-63 died 7-9 age 42. Buried at Gettysburg Natl Cemetery. Marker shown in Heroes of Gettysburg, Vil III, Part 1.”

— 2. Hannah Wilson [100% Colonial-Delaware, possibly 12.5% Colonial-Swede]. Born 1790 in Delaware, married 1807 in Washington County, Western Pennsylvania, where she also died in 1827. Her grandparents were all born in Delaware or in Delaware County, Pennsylvania. One of Hannah Wilson’s great-grandparents is named “Thomasson” (b. 1703): The typically-Swedish spelling suggests this ancestor was a possible remnant of the 1600s-Swedish colonization effort at “New-Sweden”. Even if true, the names that this original “Thomasson” line married-into were all apparently-English. Thus, Hannah Wilson was overwhelmingly English by ancestry. If this “Thomasson” was a full-Swede, Hannah Wilson would be 1/8th Swedish, making Richard Nixon himself 0.8% Swedish.

— 3. Anthony Trimmer [50% Colonial-German, 50% Colonial-NJ]. Born 1781 in Central Pennsylvania (Juniata County), married 1824 in Western Pennsylvania (Washington County), where he died in 1841. This man’s ancestors were from New Jersey. He was of partial German stock, with three of eight of his own great-grandparents of apparently-German descent, (at least one was born in Rhine-Palatinate, a Mennonite or Quaker?), and one bearing an apparently-Dutch name, Neeltje Nelley [maiden name unknown] — born New Jersey); two others bore English names and the final two bore Scottish names, the latter possible Scotch-Irish.

— 4. Margaret Hunt [100% Colonial-Yankee?]. Born 1804 in Washington County, Western Pennsylvania. Her parents were among the early American frontier settlers north of the Alleghenies; Margaret was married 1824 in Western Pennsylvania, and died 1876 in Ohio. Little is known about her background, but judging by where and when she was born (the Pennsylvania frontier), it’s likely that her own ancestry is similar to those of persons #1-3 above.

— 7. Joseph Dickinson Moore [50% Scotch-Irish, 50% Colonial-PA]. Born 1794 in Center County, Pennsylvania; married 1825 in Perry County, Ohio; died 1860 in Iowa. This man’s father’s ancestors appear to all be Ulster Protestants, often called ‘Scotch-Irish’ in the USA. Arriving in the early 1700s, they were among the first waves of Scotch-Irish to arrive in America. His mother’s grandparents were of deeper Colonial origin, all having been born in southeast Pennsylvania (Lancaster and Delaware counties). This man was a Quaker, according to the Ulster-Scots Agency.

— 8. Jane Brown [50% Scotch-Irish, 50% Colonial-NJ]. Born 1807 in Perry County, Ohio; married 1825 in Perry County, died 1886 in Iowa. She is half-Scotch-Irish by ancestry: Her father’s family emigrated from Ulster to the western Virginia frontier, probably in the 1770s. The year of arrival of her father’s family from Ireland is unclear. Her father (b.1771 in Ireland) married an American girl in 1795, suggesting that he thought himself more American than Scotch-Irish, which, in turn, suggests the family arrived when he was a small boy (1770s). Her maternal grandparents were born in New Jersey.

— 10. Martha Vickers [75% Colonial-PA, 25% England]. Born 1786 in Chester County, eastern Pennsylvania; married 1807 in Pennsylvania; died 1873 in Belmont County, Ohio. Three of her grandparents were all born in Pennsylvania, the fourth in England. ‘Colonial stock’ is something of a subjective measure and impossible to precisely-define. Martha Vickers could be called 100%-Colonial, but using the hard-definition of Colonial established above (ancestors in America in the early 1700s), she is three-quarters Colonial.

— 12. Edith Price [50% Colonial-MD, 50% Colonial-Delaware]. Born 1801 in Baltimore County, Maryland; married 1820 in Maryland; died 1873 in Ohio. Her father’s ancestors appear to be among the first Maryland-born whites. Many of her father’s lines include persons born in Maryland in the 1630s, one or two even before the colony was chartered in 1632. One marriage is even recorded in this line in Maryland in 1634. Her maternal grandparents were born in Delaware.

— 13. Jacob Burdg [100% Colonial-NJ, Early-Frontier Stock]. Born 1783 near Butlerville, Indiana; married 1807, died 1862. If his recorded birthplace is correct, then this was a “frontier” family, and was one of the few white families in Indiana at the time of Jacob’s birth. Daniel Boone’s wife, it is said, was the first white woman to see that part of North America in 1775, so the Burdg family, giving birth to a son even further west only eight years later, were frontierspeople, if there ever were any. The Tecumseh Indian uprising of that region was still a generation in the future. His mother was also of a frontier family, as she was born in Ohio in 1753. Jacob’s grandparents were all born in New Jersey. As for the name “Burdg”, I cannot ascertain its ultimate European origin. It could be German or Dutch. It has several generations in the USA by the time of Jacob’s birth, and all the names it married-into were apparently English. Jacob Burdg (b. 1783), where-ever his surname comes from, was of Colonial-stock.

With thanks to to commenter Bill for inspiring this post.

I’d like to know more about George Nixon’s U.S. Civil War service and what Jacob Burdg and family were doing in the Indiana territory in 1783.

66 Responses to Richard Nixon’s ancestry: possible clues about why some hated him