The Decline of Abortion

The Inductivist posted a study from University-of-Memphis economists, which claims

the perceived threat of HIV lowered the rate of unwanted pregnancies and abortions. [Inductivist adds:] The PC strategy of scaring the hell out of heterosexuals turned out to be a good thing.

I believe I can refute the “HIV-Scare reduced abortion” thesis in 10 seconds or less, using two graphs. Observe — 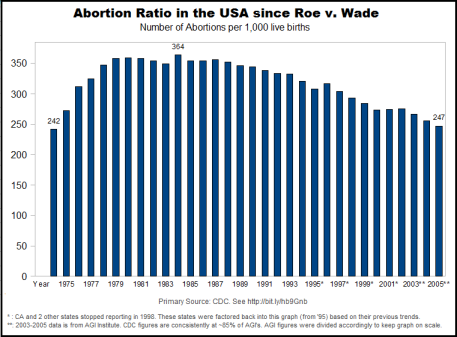 Trends in Abortion in the USA. (Click to Expand). 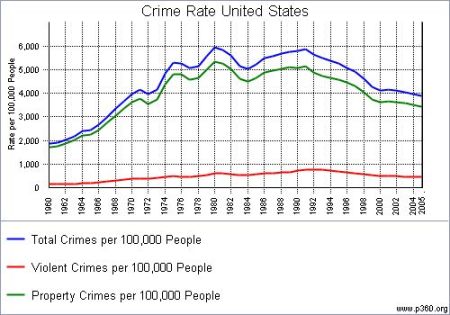 In case you are blind, I will point out that crime and abortion rose and declined more-or-less together. Both are today at two-thirds their peaks of a generation or so ago.

Did “HIV fears” scare criminals into shaping up?

Absurd. So what else could be going on here?

Back to that in a second. First, here is the authors’ argument, summarized in graph form, taken from their paper.

The graph seems to prove its thesis without need for comment. But the graph is wrong. Whoever put together that graph for the economists did extremely sloppy work. As best I can tell, they mixed data from the “ratios” column with data from the “rate” column and multiplied the latter by 10! I have put together a graph, above, accurately showing the CDC data (table of the data here). The authors cite this their source but reproduce the data completely-inaccurately from 1990.

— Abortion peaked sometime in the 1980s (CDC says it was 1984), and began its slow decline to where it is now. We might pin the beginning of the descent at 1987. AIDS became something people worried about around 1990. AIDS fears in ’87 were like Swine Flu fears in summer ’09. People knew about it, and realized it “could” be a serious problem, and heard distant stories about people being sick, but it was not personal and did not affect day-to-day life. Maybe prostitutes in ’87 and nurses in hospitals in ’09 were worried, but the general peoeple, no. AIDS in 1987 was nothing two young lovebirds would particularly fear.

— Furthermore, there was a steady increase in the share of births to unmarried mothers in the early 1990s. If people were too terrified to have unprotected sex, as the authors posit, we’d have more likely seen a decline in unmarried-motherhood, or at least stagnancy.

— As the AIDS scare is long since over (in the sense of being the Panic it was circa 1990), what explains the ongoing decline in abortions? As the graph above shows, there never was a sharp fall in abortions, as one would expect if the “AIDS Panic” thesis were valid (and as it seems in the authors’ inaccurate graph). There has been a steady decline, but which began before AIDS was an issue!

.
Striking the Root
“There are a thousand hacking at the branches…for every one striking at the root.” –Thoreau

What caused the concurrent declines in abortion and crime?

A “broad cultural shift” in the USA seems the most robust possible explanation for concurrent declining crime and abortion. It is typical of economists to be unable to understand this.

(Update: The Hispanic factor to the abortion decline is briefly examined in a discussion in the comments.)

I don’t know how exactly to pin it down. Maybe someone reading this can help there.

One part of it was surely a rebellion against the ’60s. People didn’t want a wild ride anymore. The angry sociopolitical demagoguery of previous 20th-century generations was rejected. Generation-X — in prime “crime” and prime “abortion” years when the declines began in earnest (early ’90s) — was known as apathetic and mellow.

In a related sense, there is probably a “civilizational pride” factor here: Americans saw (but did not realize yet) that Communism was defeated already by the mid-1980s, when the “corner was turned” and abortion stopped growing. When Communism collapsed a few years later, pride swelled. A turn towards the life-affirming rather than cynical, nihilistic, selfishness. Then came an easy victory in the Gulf War. Good economic times rolled. And that brings us to the present, more or less.

Good Fortune
So perhaps crime and abortion decreased to roughly two-thirds their 1990 levels because of the victory of Capitalist Liberal Democracy in the Cold War.

But “victory” also implicitly endorsed a lot of the not-so-good things, which late-20th-century Capitalist Liberal Democracy brought along on its coattails: Fake economic growth based on pushing around paper and calling it wealth; aggressively-universalist “Multi-Kulti”-ism; the rise of social atomization and “anomie”; increasing acceptance of what was previously seen as degenerate; the decline of the family; imperial adventurism; expensive social-welfare programs [esp. in Europe].

As the Oriental proverb tells us, beware of good fortune.

26 Responses to The Decline of Abortion