What share of France’s population is “diverse”, as the term is used today (i.e., non-European by ancestry)? People wonder, and — actually — it’s a bit of a mystery. Reliable racial data for France is hard to come by.

An anonymous reader sends this:

Although censuses on ethnicity are forbidden in France, the ethnic
origin of newborn babies in France can be derived indirectly from
national medical data on the prevalence of sickle cell disease which is
mostly peculiar to non-Europeans.

The results are shocking: in 2007, 28.45% of all newborn babies have at
least one parent originating from Africa (incl. North Africa), Middle East,
India or the Caribbean (see PDF attached). Fig. 1 has a break-down for all
French regions; note that in the Ile de France, basically Paris, 55.68%
newborns are of non-White origin. Box 1 gives the ethnic makeup of the
at-risk population (it also includes populations from some minor South
European states). 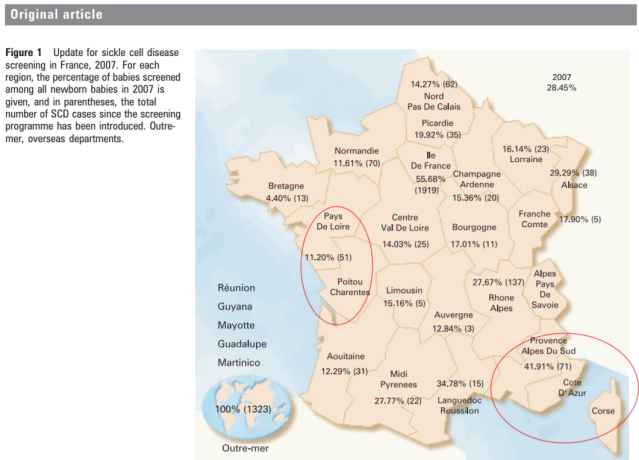 Note that immigrants from other world regions like East Asians or
Latinos are not even in included in these percentages, so the actual
percentage of non-White newborns in France is even higher.

This looks bad.    [End of communication from the anonymous reader]

As best I can tell from the wording of the study, 28.45% of babies in all of France (including overseas possessions) were deemed at-risk by health authorities based on their racial ancestry in 2007, and so were tested. Overseas-France has 4% of the official population of the French republic. The ‘Overseas French’, almost exclusively Nonwhite, produce 5% of the babies. But we already knew France had Nonwhite overseas possessions.

In terms of mainland France only, then, in 2007 about 25% of total births were deemed at-risk for sickle-cell (explicitly based on parents’ racial stock). (Mainland-only figure is derived by: [28.45-5]/95 to remove Overseas-French from the count).

(a) Some substantial change in the methodology health authorities use? Or,

Reliability of Sickle-Cell Test as Proxy for Nonwhite Population
Some Europeans are tested for sickle-cell, too: According to the study, babies with parents from Sicily and Southern-Italy, Portugal, Greece are all tested, as well as native-French from Corsica [0.5% of France’s population]. East-Asians, Latin-Americans, and other miscellaneous groups like Gypsies [as much as 0.6% of France’s population] are not tested. It’s probably about safe to assume that the number of ‘extra’ Nonwhites (uncounted by the sickle-cell test) is probably nearly offset by the number of native-Europeans tested. Generously, we could say babies of native-European ancestry from the listed regions inflate the overall share by a point or two, and to derive an actual Non-European estimate from this data we ought to subtract a point or two; maybe three, at most.

In summary, this is pretty firm and non-politicized data showing that about 30% of the babies being born in mainland France in the 21st century are of non-European ancestral background, with what may be a temporary spike in the Nonwhite share during the global recession.

Accounting for Mixed-Race Babies
Some of these babies will be partially White-European by ancestry (e.g., one White-French parent and one Arab parent). Thus, the overall share of Non-European ancestral-stock among the cohort born in France in 2010 will be lower than 31.5%, if you care to think of it in that way. That is, imagining all the babies born in France to be only 100, then 68.5 (or maybe a few more — see directly above) were full White-European babies, and (let’s say) 10 were half-WhiteEuropean (=the genetic equivalent of 5 White-European babies), = a hypothetical total of 73.5% White ancestry among French babies, collectively.

Given such a downright Raspailian state of affairs, it is no surprise that one sees…this:

We are Génération Identitaire.

We are the generation who get killed for glancing at the wrong person, for refusing someone a cigarette, or having an “attitude” that annoys someone.

We are the generation of ethnic fracture, total failure of coexistence, and forced mixing of the races.

We are the generation doubly punished: Condemned to pay into a social system so generous with strangers it becomes unsustainable for our own people.

We reject your history books to re-gather our memories.

We no longer believe that “Khader” could ever be our brother, we have stopped believing in a Global Village and the Family of Man.

We discovered that we have roots, ancestry and therefore a future.

Our heritage is our land, our blood, our identity. We are the heirs to our own future.

We turned off the TV to march the streets.

We painted our slogans on the walls, cried through loudspeakers for “youth in power”, and flew our Lambda flags high.

The Lambda, painted on proud Spartans’ shields, is our symbol.

Don’t you understand what this means? We will not back down, we will not give in.

We are sick and tired of your cowardice.

You are from the years of post-war prosperity, retirement benefits, S.O.S Racism and “diversity”, sexual liberation, and a bag of rice from Bernard Kouchner.

We are 25 percent unemployment, social debt, multicultural collapse and an explosion of anti-white racism. We are broken families, and young French soldiers dying in Afghanistan.

You won’t buy us with a condescending look, a state-paid job of misery, and a pat on the shoulder.

We don’t need your youth-policies. Youth IS our policy.

Don’t think this is simply a manifesto. It is a declaration of war.

You are of yesterday, we are of tomorrow.

We are Génération Identitaire.