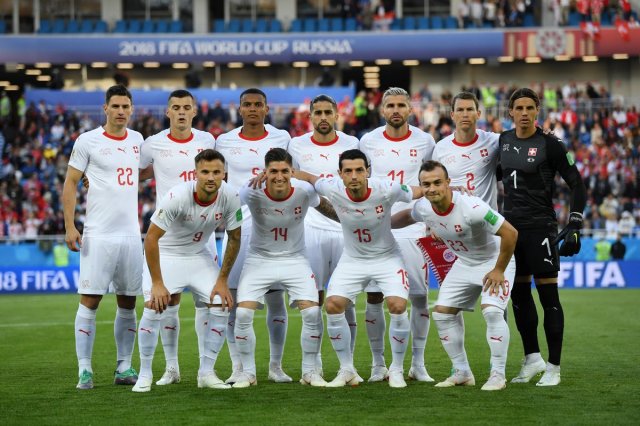 For an in-depth, player-by-player racial-ancestry analysis, see below. For commentary on the racial-cultural-political factors at play here, including the substantial Islamic presence on the Swiss national team this year, see the Analysis section below.

(Method of classification: The twenty-three men on the SWITZERLAND World Cup 2018 squad are individually evaluated by race, national-ancestral origin, birthplace, and place raised until adolescence, where such data is available. Players of half-White mixed race receive a 0.5 ‘European;’ two half-White players are thus together counted as 1.0 Whites.)

GOALKEEPERS [Whites at 2.0/3.0] [Blacks at 1.0/3.0]
— Yann Sommer (White; born near Lake Geneva in French-speaking west; French given name and German surname suggests both ancestries).
— Yvon Mvogo (Black; born in Cameroon in 1994 and emigrated to Geneva with mother circa 2000)
— Roman Bürki (White; of German origin from Bern, a Swiss-German-Protestant region; both parents of apparent Swiss-German heritage [father pictured here])

DEFENDERS [Whites at 5.0/8.0] [Blacks at 2.5/8.0]
— Stephan Lichtsteiner (White, Swiss-German origin; born in the Swiss-German-Protestant heartland area of Lucerne)
— François Moubandje (Black; born in Cameroon in 1990 and emigrated to Geneva circa 1998; Christian; dual citizen with Cameroon and Switzerland)
— Nico Elvedi (White; born in Zürich but with family origins in the southeast; despite looking German, surname suggests a possible Romansch connection; he looks remarkably like a young Richard Spencer; Spencer also has maternal German ancestry)
— Manuel Akanji (half Black via a Nigerian father and half-White by a Swiss mother; born in Canton of Zürich)
— Michael Lang (White, looks very German; native to village of Egnach on Lake Constance, Canton of Thorgau; despite bordering Bavaria, this was historically a three-to-one Swiss-German-Protestant stronghold)
— Ricardo Rodríguez (Mestizo; born in Zürich to a Spanish father and a mesitza-Amerindian mother from Chile; his mother [1968-2015] displays a high degree of Amerindian ancestry, probably over the average Amerindian share in the Chilean population [which is 40-48%, wiki]) (for simplicity, will count this player as 0.5 Amerindian, 0.5 White)
— Johan Djourou (Black; born in Ivory Coast in 1987 to an extramarital affair his Black father was having with a Black Ivory Coast woman, while married to his White-Swiss first wife; baby Johan was brought to Switzerland in 1988 after being adopted by the White wife, pictured here with her Johan, her full-Black adoptive son; other pictures exist of Johan growing up but there is never a father present)
— Fabian Schär (White; native to canton of St. Gallen)

Comparison with past SWITZERLAND squads

Assuming all these Albanian players are at least nominal Muslims, the number of (fully-)White-Christian-origin on Switzerland-2014 was: 61%. 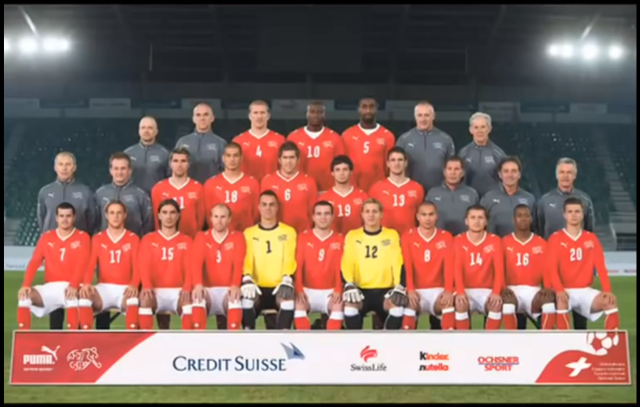 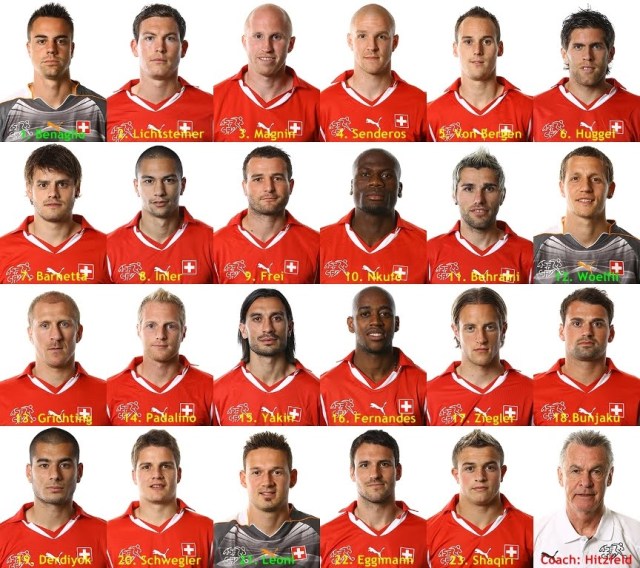 Racial-Ancestral Stock: Five non-European players, of which two Blacks and three of Turkish origin — numbers 8, 15, and 19; as numbers 15 and 19 especially are almost European-looking, we may count these collectively two as 2.5 Non-European and 0.5 European), making for a total of 80% White racial stock for the team. There was also one European-Muslim (number 11, Valon Behrami, an Albanian-Muslim), meaning White-Christian ancestry was 76%.

Racial-Ancestral Stock: Two Muslim players (one Albanian, one Turk) and one Black player. Counting the Albanian as White-European, this made for 91% White Switzerland squad in 2006, or 87% White-Christian.

Switzerland did not qualify for the World Cup in 2002.

The Switzerland-2018 squad is remarkable for having so many players of Balkan origin, especially European Muslims. This is probably in line with the Eurocrat-Multiculturalist vision for Europe, and also probably delights not just Balkan-Muslims but all Muslims, many of whom believe they will inevitably inherit Europe once the White-Christians are demographically displaced by mid-late century.

Just twelve years ago, the Swiss team represented Switzerland fairly well, but it no longer does; the vast shift towards Balkan and especially Albanian-origin players especially from 2014 reflects the vast numbers of Albanian migrants that came into Switzerland circa 1990, the stories of some of these being profiled above in the player-by-player section; 2014 was the first year substantial numbers of these “aged in.” The lesson here is that Current Migration Patterns Matter, i.e. they will affect the future. Out future is made today. A simple lesson that many of us in the West forget.

Will a Swiss ‘national’ with a White-Christian minority still attract broad-based support from the actual Swiss people?