For an in-depth, player-by-player racial-ancestry analysis, see below. For an analysis of the political significance of the racial-cultural dynamics seen or implied by Sweden’s 2018 World Cup team, see here (below).

(Method of classification: The twenty-three men on the SWEDEN World Cup 2018 squad are individually evaluated by race, national-ancestral origin, birthplace, and place raised until adolescence, where such data is available. Players of half-White mixed race receive a 0.5 ‘European;’ two half-White players are thus together counted as 1.0 Whites.) 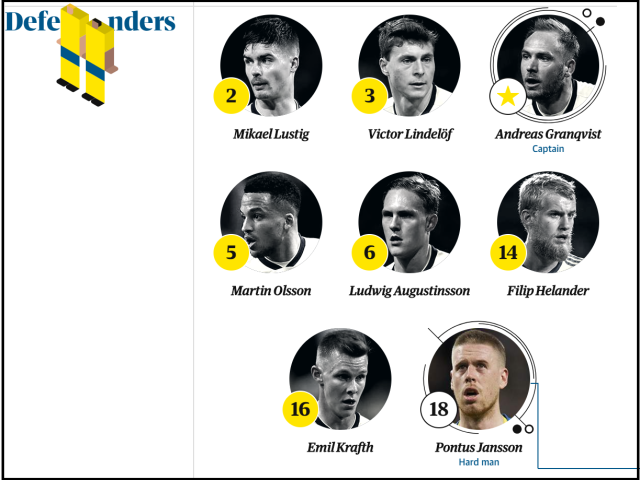 — Mikael Lustig (White; born in Umeå in northern Sweden; surname of uncertain origin, but Statistics Sweden counts 219 persons surnamed Lustig in Sweden in 2017; some pictures suggest minor East Baltid/Lappoid influence on his phenotype, as seen in many photos of Lustig; see here for photo of Lustig with then-girlfriend [married, 2013] and baby)
— Victor Lindelöf (White; born in east-central Sweden in region around Stockholm; pictured here with his fiancee, to whom he proposed in June 2017 at age 22 ahead of moving to England to play with Manchester United)
— Andreas Granqvist (White; born in Skane, southern Sweden)
— Martin Olsson, who also goes by Tony Waikwa (half-Black, half-White; White-Swedish father and Kenyan mother; pictured here; born in Gävle, east-central Sweden; Martin Olsson’s full-sister is Dirk Nowitzki’s wife Jessica, on which see “The Color of Love: Dirk Nowitzki Opens up on his Interracial Marriage,” Jan. 2017, The Undefeated)
— Ludwig Augustinsson (White, of classic Nordic type; from a wealthy Stockholm family)
— Filip Helander (White, also of classic Nordic type; born in Malmo in 1993, as the city was on its way towards tipping towards its non-European majority status, for which it became famous in the 2000s and 2010s — Update: the day after Sweden’s first-game victory against South Korea in World Cup 2018, three people were killed in an apparent gang shooting in Malmo; it is unclear if Helander grew up in a White-majority setting in or near Malmo, or amongst mainly-Muslim immigrants; he played for Husie, a local youth club in Malmo, and then Malmo FC, Sweden’s most sucessful team from 2007)
— Emil Krafth (White; born in Stockholm)
— Pontus Jansson (White; married Swedish girlfriend Asa Thornell in 2017, pictured together here)

— Sebastian Larsson (White; born in Södermanland, central Sweden)
— Albin Ekdal (White; father a well-known TV journalist in Sweden; Albin has apparent minor East Baltid/Lappoid influence perhaps through the unusual look of his father)
— Emil Forsberg (White; from a multi-generational football family in Sweden; married fellow pro-footballer Shanga Hussain [b. 1992 in Sweden], who is of Kurdish origin, reportedly through both parents, in 2017)
— Gustav Svensson (White; born in Gothenburg)
— Oscar Hiljemark (White, of classic Nordic type; born in Jönköping County, south-central Sweden; pictured here with longtime girlfriend)
— Viktor Claesson (White; born in Jönköping County, southern Sweden)
— Marcus Rohdén (White; born in Jönköping County, southern Sweden; Rohden is apparently a Scandinavian name)
— Jimmy Durmaz (Middle Eastern; is of Christian origin; family roots are as a Christian minority in the Ottoman Empire and its successor states in the Mideast for several generations; he was born in Sweden in 1989 to recent immigrant parents coming from Turkey, but Jimmy Durmaz is not a Turk nor a Muslim)

— Marcus Berg (White; born in western Sweden near the Norway border; despite his nickname, which is ‘Black Marcus,’ he has no trace of African or any non-European ancestry.
— John Guidetti (White; his ancestral origin is apparently one-quarter Italian [paternal grandfather], one-eighth Brazilian, and five-eighths Swedish; his Brazilian ancestry must have had little, likely no, non-White admixture, as Guidetti looks like a typical Nordic Swede) (=1.0 White)
— Ola Toivonen (White; father from Finland and mother presumably Swedish; born in Örebro County, central Sweden)
— Isaac Kiese Thelin (half-Black, half-White; father from the Congo, mother White-Swedish; born in Örebro County, central Sweden; like several of Denmark’s part-Black mixed-race players, there is no trace of Subsaharan-African origin in his name alone, as the name Thelin is Swedish in origin; depending on the photograph, White influence on Mr. Thelin’s appearance looks less than the 50% it is reported to be)

Comparison with past SWEDEN squads

Racial-Ancestral Stock: Team appears to hav been 95%+ White; two players of mixed origin: Henrik Larsson, half-Black (on whom more below in the Analysis section), and Rami Shaaban, half Egyptian.

Sweden’s race problem as of the 2010s is well known and needs no further comment here. As with other countries with growing Muslim underclasses across Western Europe, at the ‘elite’ level, there is either no presence of such people, or there is not but a token, ‘white-washed’ presence.

Sweden’s national team has not a single Muslim, and only one Middle Easterner (Durmaz), who is a Christian. The only trace of the substantial Muslim resident population in today’s Sweden is the Kurdish-origin wife of one player, Forsberg — see his entry above — and even she (a Shanga Hussain) is on the European-looking end of the Kurdish spectrum in many pictures online. Their children will presumably be able to generally pass for full-European in most regions of the continent, even if a little Armenoid or perhaps Dinaric looking.

Steve Sailer often writes on the under-representation of Hispanics in U.S. elite culture despite their strong demographic position of now near 20% nationally. For Swedes in political class and the peripheries around it, the Muslim issue and the wider race issue in Sweden is likewise not real, in an important sense, as they do not see it. For someone who does not ‘follow’ Sweden closely and read tehe right news in the righr way, it is very easy to imagine — and glancing at the World Cup roster would seem to confirm — that there is no Muslim issue in the country.

Yet there is a Muslim (and wider racial) issue in once-quaint Sweden, reportedly the most serious in all Europe: Sweden could well cross over to one-third Muslim in the 2040s (this according to Pew Research), with a youth share presumably yet higher still — and recall also that this does not count non-Muslim non-Europeans.

As is natural, racial-nationalist opponents of this Grand Replacement have emerged in Swedish politics, with the moderate (but certainly implicitly-)racial-nationalist Sweden Democrats (SD) political party now in a commanding position in opinion polls [Update: A poll released June 20 finds the SD with a highest-ever 28.5%; the election in a few months may return a 35-35-30 Left-Right-SD result, so divided because the ‘Right’ has said it “rules out” working with the SD]. A new party, Alternative for Sweden (AfS), a more overt racial-nationalist party, has also emerged, and will presumably put pressure on SD to stay true to its ethnonationalist program.

To the extent that the new AfS fails to attract support, and to the extent there has been no reaction so far, it is arguably again because Swedes just do not “see” the problem, that is, the problem is structurally hidden; Sweden’s zero-percent Muslim World Cup roster in 2018 is a kind of metaphor for this.

(Note that one of Sweden’s all-time best players, Zlatan Ibrahimović [born 1981 in Malmo; member of Sweden national team, 2001-2016] was born to a Bosnian-Muslim father and a Croat-Catholic mother, who emigrated to Sweden in 1977, but Zlatan has never specifically identified as a Muslim, except for the cachet of being “half-Muslim”; he has identified as a Catholic in recent years.)

Another note, on mixed-race players with Black ancestry: Just as in Denmark, the two half-Black players (Isaac Thelin and Marcus Olsson) give no hint of their racial origins through their names (rather, the names their mothers insisted they use); make of that what you will. This is actually nothing new, as ‘Swedish’ national-team star Henrik Larsson (b.1971; member of Sweden National Team, 1993-2009) also has the same story as the younger players born twenty years later; note also that mixed-race Henrik Larsson’s Black-African father also disappeared when he was a boy (see also many such stories in player profiles for England players, among others; people have short memories, but the same stories seem to get played out again and again in history…)