I present the latest data on U.S. Total Fertility rates by race through 2013. (Data source links at the end of this post.) You can see herein the full effect of the George W. Bush Housing Bubble in its historical context: 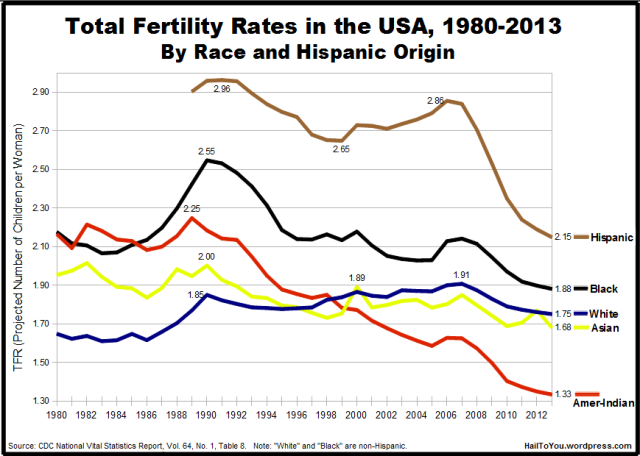 Note that this Total Fertility Rate data is based on the race of the mother.

(1) The 2000s Housing Boom, or, the 2000s Baby Bubble. The housing bubble brought with it a baby bubble, most especially for Hispanics. The White TFR, too, was apparently lifted by the Housing Bubble, by as much as a sustained one-tenth of a TFR point over a period of years. This amounts to something like a million additional White Americans being born than would have been without the Baby Bubble. (Yes, that gentle bulge in the blue line, from 2000 to 2008 amounts to around a million more White births than would have happened without the bulge.)  However, the number of “extra babies” of other races born during the Housing Bubble considerably exceeds this in relative terms. (With the exception of the luckless Amerindians. See below.)

(2) Whites. The good. White Non-Hispanic TFR has been remarkably stable over the past 25 years. White births recovered to 54% of total births by 2013, up from reportedly crossing below the 50% threshold a few years ago (the 2010-2011 period). The bad. White Americans have had sub-replacement fertility since either 1970 or 1971 and TFR reached quite low depths in the later 1970s and 1980s. The current 1.75 children/woman for White women drops to around 1.6 if counting only “White couples,” as about 10% of White women who give birth have a Nonwhite partner according to other data. The verdict. A sustained “all-White” 1.6 TFR means that each child generation is about 75% the size of its parent generation; this means steady population contraction, but no collapse; it puts U.S. Whites better off than very many other ethnic majority populations in the rich world.

(3) Hispanics. The sharp downward slope of the Hispanic TFR line from the height of Bush’s Housing Bubble in the mid-2000s to (very likely to be) below replacement level by the mid-2010s is obvious. What it implies may not be: It suggests the Bush economy was a kind of “Hispanic fertility subsidization” affair, even if not intentionally, even more than for Blacks or Whites. The natural state may have been for the Hispanic TFR line to descend steadily its level circa 2000 (2.65) to its present 2.1. Everything above that hypothetical line is, or can be seen as, “extra births” due to the Bush economic bubble. This is a simplification but I think largely correct.
.

The CDC data also breaks the Hispanic total down by nationality/ethnic origin:

TFRs for Hispanic Groups in the USA, 2012

Both Cuban and Puerto Rican TFRs are now lower than Whites’. Actually, Cuba TFR has been lower than non-Hispanic Whites’ for a long time. Looking at the entire period from 1989-2012,

The Other Hispanic category (probably largely Central American) is the only one with a TFR in the 2010s that exceeds its 1989-2012 average.

(4) Blacks. A concern of generations past in the USA was that Blacks would outbreed Whites. This relatively recent data bears out that this was a justified fear even as late as the 1990s. (Black TFR was often more than 0.5 points above White TFR in the 1980s and 1990s, which, sustained over time, is very substantial). Then fertility rates converged. The Black fertility edge has, since the early 2000s, been small. By 2013, it was just a 0.1 TFR point advantage.

(4a) Black American Fertility vs. Black African Fertility. Blacks in Africa remain the most high-fertility people in the world (See Steve Sailer’s “The World’s Most Important Graph“. Blacks are said to follow a more “r-selected” (higher fertility) reproductive strategy, whereas Whites tend to be “k-selected” (lower fertility). Yet U.S. Black and White fertility has very nearly converged. How?

(5) American-Indians. The steady decline we see in Amerindian TFR is troubling and begs an explanation. From a robust 2.25 in 1989 to by 2013, 1.33 (by far the lowest). This is as low as the lowest fertility states in the world in East Asia (Japan, South Korea). Amerindian TFR declined almost every single year between ’89 and ’13 except briefly during the height of the Bush Housing Bubble. American-Indians also have a high outmarriage rate.

(6) Asian. The category “Asian” is useless, as it includes too many disparate groups to make reasonable suppositions about trends. The CDC does not break down the data for Asians further.

Data source: Official data on total fertility rates by race and Hispanic origin are calculated and released by the U.S. CDC every year, buried rather deeply in their reports but accessible to those committed to finding it. The graphs above were made by me. Similar graphs are not produced by the CDC.

This data comes from the CDC’s National Vital Statistics Reports, Vol. 64, No. 1, released on January 15, 2015. Total Fertility Rate data broken down by race and Hispanic origin is in Table 8 of that report, page 28 and onward, except for Asians and American Indians, the data for which can be found in Table 13 (pg.38) of the same report.

The graph is also based on previous Vital Statistics reports, going back to Vol. 59, and following amendments by the CDC. The final fertility data for 2014 will be released in January 2016. Preliminary data (p.4) suggests that overall U.S. TFR ticked slightly up between ’13 and ’14, going from 1.858 to 1.862, but this change is so minuscule it may even be wiped out in the final data.