For an in-depth, player-by-player racial-ancestry analysis, see below. For commentary on the political implications and racial-politics of the declining share of full-White players on England’s national team, see the Analysis section.

(Method of classification: The twenty-three men on the DENMARK World Cup 2018 squad are individually evaluated by race, national-ancestral origin, birthplace, and place raised until adolescence, where such data is available. Players of half-White mixed race receive a 0.5 ‘European;’ two half-White players are thus together counted as 1.0 Whites.)

— Kyle Walker (light-skinned Black; Jamaican ancestry, probably near half White by ancestry) [=0.5 White, 0.5 Black]
— Danny Rose (Black; both parents Jamaican [source]; born in Yorkshire)
— John Stones (White; born in Yorkshire, northern England)
— Harry Maguire (White; born in Sheffield, Yorkshire, northern England)
— Kieran Trippier (mostly White and part Black; born in Greater Manchester; phenotype reveals Subsaharan-African ancestry, likely around 25% (quadroon in historical terminology; sometimes called “high yellow“); his father appears to be at or around 50% Black, and his full-brother Kelvin is listed on Wiki as being an “English person of Nigerian descent;” if the Nigerian connection is correct, I would guess his father, whose skin-tone resembles Barack Obama Jr.’s, to be half-Nigerian at most; Kieran’s mother presumably is White) (=0.75 White, 0.25 Black)
— Gary Cahill (White; born in Derbyshire, East Midlands)
— Phil Jones (White; born in Lancashire, NE England)
— Fabian Delph (Black with some White admixture; born in Bradford, Yorkshire; mother is Donna Delph, a criminal who defrauded large sums of money from the British state; Donna Delph’s picture reveals her to be perhaps half-Black; she appears to have raised Fabian as a single mother; the father is likely full-Black, making Fabian around 75% Black and 25% White, making for a phenotype typical for an Afro-American) (=0.25 White and 0.75 Black)
— Ashley Young (Black; born Hertfordshire, East England; parents Jamaican origin)
— Trent Alexander-Arnold (half-Black, half-White; born in Liverpool; England’s youngest player this year, born in late 1998 [see here for a picture of him as a ‘mascot’ in a 2009 club game]; his mother, Dianne Alexander, is apparently White and from a prestigious footballing family and no information is available on his father, presumably surnamed Arnold; due to Trent’s obvious Subsaharan ancestry, it can be presumed that his father was full- or near-full-Black)

— Eric Dier (White; born in Gloucestershire, SW England)
— Jesse Lingard (apparently half-Black, half-White [White mother]; born in Cheshire, NW England; Lingard is an English name (see, e.g., John Lingard, an early 19th century English Catholic historian); I find no information on Jesse’s father, whose surname may or may not be Lingard; Jesse Lingard appears to identify with his Black ancestry); no information online indicates any Muslim affiliation for Lingard; whatever his Black ancestry, even if it is of African-Muslim origin [for which there is no evidence on way or another]. the apparently-absent father did not impress a religion upon his mixed-race son; as with so many of the mixed-race children of Black fathers profiled in these pages, the Obama story comes to mind)
— Jordan Henderson (White; born in Sunderland, NE England)
— Dele Alli (half-Black, half-White; born “to a Yoruba Nigerian father Kehinde and English mother Denise. […] Alli was initially brought up by his mother, who suffered from alcohol problems. […] Kehinde moved to the United States a week after Alli’s birth, though was periodically involved in Alli’s adolescent years. […] At the age of nine, Alli moved to Nigeria with his father, where he spent some years in an International School” [Wiki]; see here for picture of Dele as a child with his father; Dele’s feelings about his Black ancestry are no doubt, as with all mixed-race persons, complicated, but some insight can be drawn from his 2016 decision to drop his legal surname ‘Alli’ from his jersey and replace it with his first name, ‘Dele’ [see here]; ‘Alli’ comes from his Black father of Yoruba origin — see here for an early-2018 Nigerian press article about Delle Ali entitled “The Yoruba football star who has cut ties with his father Kehinde” — and the Yorbuas are a major ethnic group of southwestern and north-central Nigeria constituting over one-fifth the Nigerian population; some sources have Yorubas at 60-40 Christian-Muslim, though they do not overlap with the northern Nigerian Muslims of recent fame for their extreme Islamism; the surname ‘Alli’ would indeed seem to suggest an Islamic origin, but in Deli Alli’s case, there is no evidence of any Islamic affiliation and some evidence online of nominal Christianity)
— Ruben Loftus-Cheek (half-Black [Guyanese father], half-White [White-British mother]; born in London)

— Harry Kane (White; English and Irish ancestry; born in Greater London)
— Raheem Sterling (Black; of Jamaican birth; “Sterling was born in the Maverley district of Kingston, Jamaica, and spent his early years there […] His absent father was murdered in Jamaica when Sterling was two years old. […] At the age of five [circa 2000], he emigrated to London with his mother.” [Wiki])
— Jamie Vardy (White, born in Sheffield, Yorkshire)
— Danny Wellbeck (Black, parents from Ghana; born in Manchester; parents of Christian origin, according to Wellbeck himself, who said in a 2012 Daily Mail interview: “We are a religious family. My Mum still goes to church every Sunday”)
— Marcus Rashford (Black Caribbean ancestry; born in Manchester; England’s second-youngest player born in late 1997)

The majority of England’s players in 2018 have at least partial Subsaharan-African ancestry, though the team’s overall racial stock remains majority White-European (calculated in this post to be 63%) due to so many players being mixed Black-White.

Britain, a ~100%-White nation until the past generation or two, in 2018 fields a ‘national’ team has only eleven of twenty-three players full-Whites, including only eight of twenty (40%) full-Whites among field players (non-goalkeepers).

Can White English people really and truly get behind such a team that doesn’t ‘represent’ them in racial terms? Might a White-minority team suffer from similar problems White-minority France World Cup teams have?

As for the England national team, how recent is this evident de-Europeanization?

Comparison with past ENGLAND squads

Racial-Ancestral Stock: Without an in-depth analysis, the full-squad official photo shows about six players with visible Nonwhite ancestry, all or almost all Black; if so, seventeen players were of fully White-European origin, or 74% of the squad.

England Record in 2014 World Cup
3: Games (finished at 26th place, just behind Ghana and Russia and just ahead of South Korea and Iran)
2: Goals For
4: Goals Against
-0.7: Goal Differential per Game Played 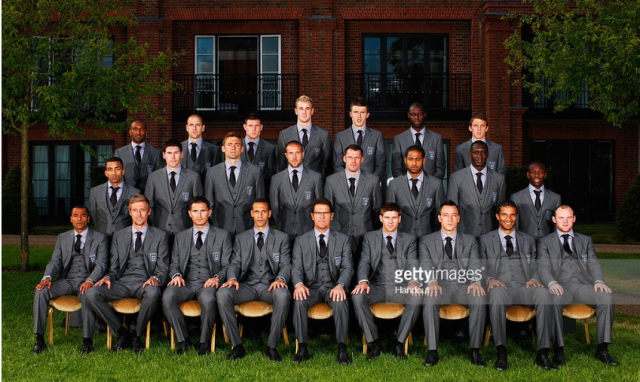 Racial-Ancestral Stock: Nine players appear to have Nonwhite ancestry, all or almost all Black; if so, fourteen players were of fully White-European origin, or 61% of the squad.

England Record in 2010 World Cup
4: Games (finished at 13th place, just behind the United States and just ahead of Mexico)
3: Goals For
5: Goals Against
-0.5: Goal Differential per Game Played

Racial-Ancestral Stock: Eight players appear to have Nonwhite ancestry, all or almost all Black; if so, fifteen players were of fully White-European origin, or 65% of the squad.

England Record in 2006 World Cup
5: Games (finished at 7th place, just behind Argentina and just ahead of Ukraine)
6: Goals For
2: Goals Against
+0.8: Goal Differential per Game Played

Racial-Ancestral Stock: I find no full-team photo of the 2002 squad; their names are available here; I count eight Nonwhites, making for fifteen fully White players (65%).

England Record in 2002 World Cup
5: Games (finished at 6th place, just behind Spain and just ahead of Senegal)
6: Goals For
3: Goals Against
+0.6: Goal Differential per Game Played

England in 2018 has fielded what must be the highest share of mixed-race players of any European team in history. The share of full-White players has proceeded as follows since 2002:

The Shadow of the Blair Ideologues of ’97, Cast Twenty Years into the Future, and the Drive to Undermine White-Britain

Tony Blair took over as Prime Minister of the UK the day after winning the general election of May 1, 1997. Several of the Nonwhite players’ individual stories are in some way associated with post-1997 change in defacto race policy in the UK under Blair, i.e., with policies they knew well would significantly undermine the White then-supermajority. The scale of the Blair-era Labour Party’s major shift in policy is evident in this graph:

Many of England-2018’s nonwhite players reflect the Tony Blair-era shift that came twenty-one years before the present World Cup. One player — Raheem Sterling, born in Jamaica in 1994, immigrated to UK circa 2000 — was only able to arrive in England due to Blair’s open-door immigration policy. Two players, part-Black Alexander-Arnold and Caribbean-Black Rashford, were born after the Blair shift; the story of another, Dele Alli (see above), though born a year before the Blair victory, feels representative of post-Blair Britain as well in that he was born to Black migrant father and a White mother who mainly raises him after the African migrant father disappears (a story in common to many of the players with Black fathers). Then there is the story of Fabian Delph’s Black mother (see above), found guilty of $60,000 in welfare fraud in 2007, which she committed while Fabian was between eight and fifteen years old — Fabian’s father, meanwhile, appears again to have been absent.

(Note that Nonwhite players on the England national team are nothing new, as full-White players have only made up about two-thirds of the team since at least 2002.)

Look as hard as you want, you will see no trace of non-European ancestry on this, England’s best-ever-performing World Cup team. Some of the people around Tony Blair in 1997 came in with an agenda: “That kind of Britain, the one you see in the 1966 team group photo, must go. White, racist Britain: Never again.”

Exaggeration, some will say. Sadly, not quite:

The huge increases in migrants over the last decade [since the late 1990s] were partly due to a politically motivated attempt by ministers to radically change the country and “rub the Right’s nose in diversity”, according to Andrew Neather, a former adviser to Tony Blair, Jack Straw and David Blunkett.